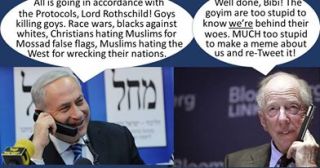 The unprecedented catastrophe of the Russian revolution required an explanation… For very many this lay in the coming to power of the Jews, and their hatred for the Russian people. For after the revolution of February, 1917, the Jews acquired full rights with the rest of the population, and the barriers set up by the Pale of Settlement were destroyed. Jews poured from the western regions into the major cities of European Russia and soon acquired prominent executive positions in all major sectors of government and the economy…. The mainly Jewish nature of the Bolshevik leadership—and of the world revolution in general—cannot be doubted….
“The Jews were especially dominant in the most feared and bloodthirsty part of the Bolshevik State apparatus, the Cheka, which, writes Brendon, “consisted of 250,000 officers (including 100,000 border guards). In the first 6 years of Bolshevik rule it had executed at least 200,000. Moreover, the Cheka was empowered to act as ‘policeman, gaoler, investigator, prosecutor, judge and executioner’. It also employed barbaric forms of torture….
“So complete was the Jewish domination of Russia as a result of the revolution that it is a misnomer to speak about the ‘Russian revolution’; it should more accurately be called the ‘Russian-Jewish revolution’.”

(Scroll down to “Bolshevism and the Jews”, here)
Email from Lasha Darkmoon,
February 16, 2013
Dear Mark,
Thank you for pointing out the defective link in my article. How it got in there I have no idea. Sometimes these things happen when one is writing and publishing in haste. I have deleted the defective link and substituted the following paragraph in its place: “See here, here, here, here and here for more details on the systematic destruction of Christian churches and the persecution of Russian Christians under the Jewish leaders of the Russian Revolution. See also extended endnote”
The extended endnote (duplicated below) will be of particular interest to you, though it may not satisfy you if you are a committed Zionist and wish to find excuses for the well-documented crimes of the Bolshevik Jews after the 1917 Russian Revolution.
I am well aware that Jews were among those killed in Stalin’s purges and that some synagogues may have been closed down, but that occurred at a much later date and it does not in any way exculpate the Jews for their strikingly prominent role in the Bolshevik Revolution—and it certainly does not make the Jews the victims of the Revolution, no matter how hard they strive for victim status. They are the war criminals here. Period.
The authority you quote, and to which I mistakenly provided a link, appears to be a Zionist source. I do not trust Zionist sources as a matter of principle. They are known to lie and exaggerate and indulge in elaborate fantasies. Weren’t they the ones who got us into the Iraq War on false pretenses, relating to non-existent weapons of mass destruction? And aren’t they trying to pull the same fast one on us right now in regard to Iran?
Even after the Stalinist purges, organized Jewry remained entrenched in power in the Soviet Union. Jews continued to occupy all the most important posts in the Soviet government. And Stalin who was head honcho, though not a Jew nominally, was the ultimate Shabbat goy, a Jew in all but name or what some might wish to call a “spiritual Jew”. He married into a Jewish family, had Jewish mistresses and friends, and at every point in his career was surrounded by Jewish commissars. Lenin, who was partly Jewish, had always been his role model and chief ideological influence.

Stalin with his Jewish-brother-in-law, Lazar Kagaonvich.
(Hard to tell them apart)
Stalin’s Jewish brother-in-law moreover, Lazar Kaganovich, remained Stalin’s constant advisor, confidante and close friend. And Kaganovich was the greatest mass murderer of them all, reportedly claiming responsibility for the death of 20 million people. Funnily enough, Kaganovich was to outlive all the other Bolshevik killers, dying only in 1991—whereas Stalin met his Maker in March 1953 after one of his closest buddies, probably Comrade Beria, slipped some rat poison into his wine.
On a former occasion, when in debate with Israel Shamir, I had this to say about Lazar Kaganovich and the other omnipotent Soviet Jews who helped to make life a living hell for millions of Russian Christians. These mass murderers, purportedly running a revolution in support of the working classes—“the dictatorship of the proletariat”—managed to kill tens of millions of innocent peasants in the process. To improve the world these miserable sonofabitches needed to wade through seas of blood. And later on some Jew in Hollywood would quip, “You can’t make an omelette without breaking eggs!”
Kaganovich and his evil crew of natural born killers certainly knew how to break heads as easily as you and I know how to break eggs. “The death of one man is a tragedy, the death of a million is a statistic,” Stalin is said to have joked on one occasion.
Here is what I wrote roughly a year ago in an article:
“One Jew alone, the infamous Lazar Kaganovich, personally claimed responsibility for killing twenty million [people]. It was he who stood atop the rubble of a Christian church and proclaimed, “Mother Russia has been cast down! We have torn away her skirts!”
“Apart from Kaganovich, there were other Jews who contributed to the massacre of Christians under the cruelest circumstances: Ilya Ehrenburg, Natalfy Frenkel, Mathias Berman, Genrikh Yagoda (lingerie pervert), and, last but not least, Lavrenti Beria—though Beria may or may not have been Jewish. Mainstream historians assert that he was not. But they would, wouldn’t they?—given that Beria was not only a mass murderer of peasants, but also a bloodthirsty sex maniac and pedophile who buried children in his basement—probably alive. (See here and here, pp. 516-519).
“At no other time in the history of the world has a country been so saturated with Jewish influence as it was between 1917 and 1953 in the Soviet Union: the time of the great gulags and the merciless slaughter of the peasants.”
Incidentally, I will be dealing with this topic in more detail in a separate article soon.
You quote me as writing the following in my article on the Frankfurt School, objecting to the four words in bold font: “In the Soviet Union, under Stalin and his Communist Jews, the emptying of churches was accomplished by the simply expedient of burning the churches down—thousands of them—and building synagogues instead.” You will be pleased to hear that I have decided to delete these four words in bold font, since I have been unable to locate my original source for this statement or to find any reliable documentary evidence of synagogue substitution for demolished churches.
However, these four words in bold font, “and building synagogues instead”, are not really necessary. In principle, I see no reason why these Jewish revolutionaries, who actually went out of their way to demolish Christian churches, should raise any objections to the erection of synagogues if their fellow Jews should request such new synagogues. Suffice to say that we have more than enough evidence that Orthodox Christian churches were demolished in huge numbers, which is all that really needs to be said.
See “Endnote” HERE (but also duplicated below) for more details on the destruction of Orthodox Christian churches and the systematic torture and mass murder of Russian Christians by the Bolshevik Jews.
Sincere best wishes,
Lasha Darkmoon

Note that quote carefully: “Kaganovich also ordered the shocking demolition in downtown Moscow of the Cathedral of Christ the Savior in 1931. It was replaced by a giant swimming pool.”

American historian Edwin Schoonmaker writes:
“Fifteen years after the Bolshevist Revolution was launched to carry out the Marxist program, the editor of the American Hebrew could write: “According to such information that the writer could secure while in Russia a few weeks ago, not one Jewish synagogue has been torn down, as have hundreds—perhaps thousands of the Greek Catholic Churches… In Moscow and other large cities one can see Christian churches in the process of destruction… the Government needs the location for a large building,” (American Hebrew, Nov. 18, 1932, p. 12) Apostate Jews, leading a revolution that was to destroy religion as the “opiate of the people” had somehow spared the synagogues of Russia.” (“Democracy and World Dominion,” 1939, p.211).
Wikipedia tells us that the Communist state after the 1917 Bolshevik Revolution  was “committed to the destruction of religion”, and destroyed churches, mosques and temples — no mention of synagogues being destroyed —  and that it “ridiculed, harassed and executed [Christian] religious leaders, flood[ing] the schools and media with atheistic propaganda.”
Since the Russian Revolution was essentially a Jewish revolution, with an overwhelmingly high percentage of its leaders being Jewish, one can understand why synagogues were NOT destroyed. The animosity of the Jewish leadership was directed almost exclusively toward the Christian clergy and their churches. Monks, nuns and priests were put to death in large numbers, often after being cruelly tortured in the process, their eyes gouged out and in some instances being boiled alive.
(For graphic details of the systematic torture of Christians under the Bolsheviks, see here and section 7, “Fiendish tortures devised by the Jewish cheka”, here).
According to the Atlantic, September 1991, p.14, “In 1919, three-quarters of the Cheka staff in Kiev were Jews, who were careful to spare fellow Jews. (See footnote 21, here)
For more on the specifically Jewish character of the Russian Revolution, see here and here.
Russian-born Jewish writer Sonya Margolina goes so far as to call the Jewish role in supporting the Bolshevik regime the “historic sin of the Jews.” She points, for example, to the prominent role of Jews as commandants of Soviet Gulag concentration and labor camps, and the role of Jewish Communists in the systematic destruction of Russian churches. Moreover, she goes on, “The Jews of the entire world supported Soviet power, and remained silent in the face of any criticism from the opposition.”
In light of this record, Margolina offers a grim prediction:
“The exaggeratedly enthusiastic participation of the Jewish Bolsheviks in the subjugation and destruction of Russia is a sin that will be avenged. Soviet power will be equated with Jewish power, and the furious hatred against the Bolsheviks will become hatred against Jews.” (Cited here)

THE RAT TORTURE
A red-hot poker, when pushed through the bars of the cage, would force the maddened rat to escape by gnawing its way into the stomach of the human prisoner. This is one of the tortures the Bolshevik Jews are reported to have introduced from China. They certainly had Chinese torturers working for them, just as today the American government has relied heavily on the expertise of Israeli torturers at Abu Ghraib and elsewhere.
Further corroboration for the horrendous crimes committed by the Jewish Bolsheviks will be found in part 2 of this 2-part article by Lasha Darkmoon. The most detailed and impassioned account of Jewish atrocities committed against Christians is probably  Eustace Mullin’s cult classic article, The Secret Holocaust: The real holocaust was a Christian Holocaust by Jews of sixty-six millions, mostly Christians. P ersonal feedback: darkmoon@darkmoon.me
https://mysteryworshipers.wordpress.com/2013/02/16/sixty-six-million-christians-murdered-by-jewish-bolsheviks/